We took an early train out of Rome. Well, for us it was early. We departed at 10:35, sharp. I had many reservations about this Naples stay. I didn’t want to visit Naples at all. The rumors were bad: Naples was not only rough but also ugly. A useless stop on a well-planned tour of Europe’s best. In fact, I even tried to stay in Sorrento – but it made no sense; everything was closed. All I could do was suck it up and subject my family to the dangerous ills of this forgotten city of disrepair. 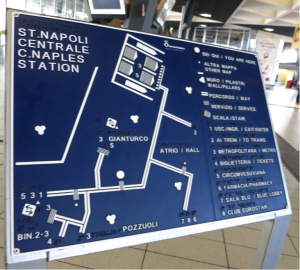 Naples is a gem. It stands proudly alongside the eponymous Bay of Naples, rising along a hillside that is organically and integrally connected to the city itself. Naples has a history that outstrips that of Rome (as a geographical location) and monuments that could make Florence sigh. However, as a port city between Civitavecchia and the Amalfi Coast with a Mafioso heritage, Naples has gained an inglorious reputation as an outdated outpost for outlaws. Furthermore, with its lack of industry and resistance towards modernization, this town of clotheslines and fishmongers feels distinctly anachronistic. If you are looking for a McDonald’s, you can certainly find one, but it won’t be flashing its golden arches in your face. For this is a city of pizza, not Happy Meals. And it’s loaded with culture, if you can erase your preconceptions of what culture means. FYI, it does not mean frozen in time or Disney-esque. Culture means a way of life, reality, inhabitation, evolution, elasticity, blood flow. Naples has it all.

We weren’t familiar with the town, however, so we hired a guide. Yes, I know, this is getting to be a pattern for us, but we don’t have all the time in the world here. We don’t have time to read, visit, reread, and revisit. We have to get it all done in one fell swoop. A guide lets us do that. A great guide helps us bypass the fluff and cut to the core of the experience. Luckily, in Naples, we contacted the Mondo Guides agency, which scheduled our visit with the dashing Andrea Ruggiero. 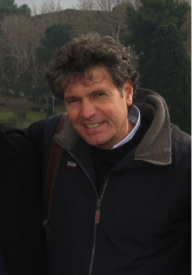 Andrea possesses a palpable passion for Naples. Although he hails originally from Sorrento, this is a man who has grown up in the shadow of Vesuvius, a Neapolitan through and through. He started us off with a ride on the metro of Naples, a modern wonder. The metro of Naples might go overlooked by many cruise-ship tourists, but it’s been recognized by the entire EU for its genius construction. It’s a work of modern art all unto itself. Andrea pointed out the three levels or construction – the yellow level of tuff that represents the city of the ancients down to the blue level of the sea, which the city had to drain arduously in order to create the metro itself. The metro contains gorgeous mosaics that make you ask yourself if the eventual inhabitants of the eventual earth will discover them and try to interpret our position, our perspective, and our prowess. Without such a masterful guide, there is NO WAY we would have gone into the metro. And that’s just the beginning.

From there, we went to the Naples Archaeological Museum, an international treasure that houses the finest finds from Pompeii and Herculaneum. While I could go on for eternity about what we saw in the museum, I’ll instead tell you the harsh truth: Even an archaeology buff like me could not possibly have navigated that sea of antiquities alone. There is simply too much to see, too much to process, too much to contextualize. A guide helps you see the highlights, but he/she also gives insight into relics that might otherwise seem flat and meaningless. 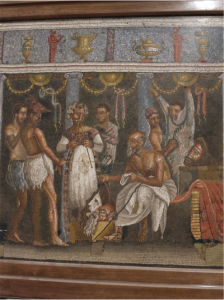 With Andrea’s narration, we did more than observe antiquities; we interacted with them. Rather than tell us the art’s meaning, Andrea encouraged us to make our own interpretations. In doing so, he acknowledged that no matter how closely scholars examine the findings and no matter how much background they have to make informed conclusions, archaeology is not an exact science. Interpretations change, and people perceive differently. Therefore, the remnants of Roman daily life left behind in Pompeii and Herculaneum are yours to view how you wish.

In addition to that necessary stop into the museum, we strolled through the streets of Naples, the only city that retains its original city plan. Naples was never completely rebuilt or redesigned, unlike other Italian cities, such as Rome and Florence. Therefore, it remains a hive of tenements, all arranged on a planned Greek grid (Naples was founded by the Greeks as the Nea Polis, or new city, which is where we get Neapolitan). The streets are extremely narrow, giving the city a closeness that grand, wide avenues eradicate. Naples is also a hodgepodge of life; the very rich and very poor live on top of one another, sharing a common character, if not a common standard of living. We punctuated our walk through the Neapolitan maze with visits to chapels and churches, learning all about the Sansevero noble who built the elaborate, awe-inspiring Sansevero Chapel that houses the Cristo Velato – the Veiled Christ. Andrea pointed out the Masonic elements in the chapel and explained the public reaction to sculptures so impossibly lifelike. He took us into the bowels of the chapel to see evidence of the medical experimentation that Sansevero conducted, as well as informed us of Sansevero’s role in creating the first raincoat. It was one wonder after another, simply nonstop.

That night, we drove up into the hills that overlook the Bay of Naples to see the ancient Roman port from a distance and observe the same waters that have attracted visitors and worshipers for millennia. I could almost see Pliny the Elder, boating across the bay, pelted by pumice, trying to get a closer view of Vesuvius – and ultimately suffocating from the gases. So many famous historical figures have peered out at those same waves that I felt an overwhelming intimacy with the past in a way I rarely have in Rome. Perhaps it was the wintry timing of our visit, which practically emptied the harbor, but I felt like we had a pristine view all to ourselves, unmarred by grossly oversized cruise ships and undisturbed by hordes of fanny pack-toting tourists.

By the time Andrea dropped us back at the hotel, it was with an excellent dinner recommendation and a promise to meet us bright and early the next morning for a full day of immersion in Roman history at the sites of Pompeii, Herculaneum, and Oplontis. 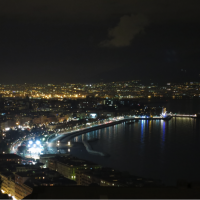 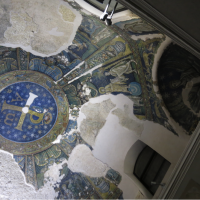 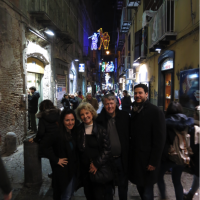 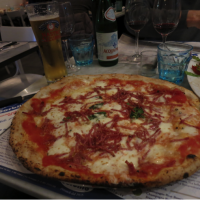