A Day Trip to Delphi

Many Americans have read the Oedipus myth – the one where the man kills his father and marries his mother in an attempt to outrun fate? Or, perhaps you’ve heard of the legendary King Croesus, the richest man in the world, who could not decide whether or not to fight the Persians? No? Then, maybe you’ve heard of the Trojan Wars, where the Greeks fought their Asian foes, most likely for access to the Black Sea? If you know of any one of these tumultuous tales, you’ve got a background to understand Delphi, the Oracle of Apollo, the international temple for all who sought answers.

Jamil and I knew we wanted to go to Delphi because we had read so much about the site, but it was difficult to figure out how to rouse the interest of others. After all, like so many people, my parents had heard about the site and learned bits of information about the ramifications of its prophecy, but then only the human experiences had endured in their minds while the shrine faded from their memories. On their own, my parents would NEVER have booked a tour to Delphi! But educational travel as a family is all about overcoming this kind of disparity in interest – and the best way to achieve that aim is to find an interesting guide. Thank goodness we happened upon Andromache at the museum on the 31st of December because she and her husband became our guides to Delphi on the 2nd of January. 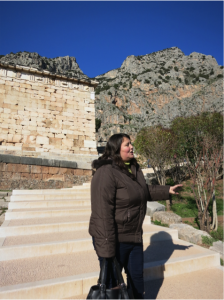 We thought we were renting a minivan that Andromache’s husband, Kostas, would drive, but somehow the minivan never materialized, so our family of four wound up riding in a 50-passenger bus – alone. It was a bit awkward, but extremely comfortable, as we set out on a 2.5-hour voyage to Delphi (so much less cumbersome a trek than anything our ancient Greek predecessors faced in the past). As we drove, Andromache explained bits of history we never knew. Apparently, the road to Delphi was fraught with thieves hoping to snag offerings to Apollo at his oracle. Therefore, it was always safer to go by boat via the Ionian side of Greece. Andromache promised that when we arrived at Delphi, we would see for ourselves the reason the Greeks opted for this method of travel. In addition, she described the olive groves that connected Delphi to the valley and the sea below. According to legend/perhaps the truth, in Delphi there is at least one olive tree for each Greek citizen (currently bordering on 10 million). Still, with her colorful words fresh in my mind, nothing prepared me for the vast expanse of olive groves stretching for miles until running directly into the sparkling blue sea. Delphi must be seen firsthand to be believed.

I’ll be honest. I came to Delphi with bias. I was going to love it no matter what. Truly. However, my parents held no such preconceived notions. While Jamil had some background knowledge and had listened to the same archaeology lectures as I, my parents were newbies to Greek archaeology and easily bored. At the Delphi museum, I gawked at the charioteer statue and could have spent hours fixating on each shard of pottery. It’s hardly fancy or elaborate, and even in the off season, there are loads of tour groups.

I think the museum was worth visiting for a few reasons. First, there was the gorgeous depiction of the god Apollo with gold embellishments. The god appears black in the statue, but that’s because a fire consumed the ivory piece over a thousand years ago, charring the remains. What is left exists only because it was buried, an earthbound time capsule for modern humans, safe from the reach of gold-hungry barbarians. 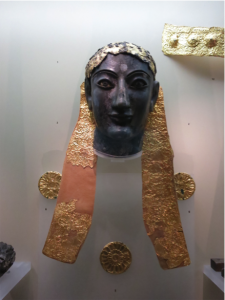 This piece serves as evidence of the rich, shiny wonders that decorated Delphi’s temples, treasuries, even streets. To the right of that blackened piece of ivory stands a flattened piece of silver, a life-sized bull, once three-dimensional but crushed underground by the weight of the millennia. This startling piece of metalwork was given to Delphi as thanks for a profitable catch of fish by the Sifnians (I hope I wrote it down correctly!). Next, the charioteer was breathtaking. It’s one of the finest pieces of Classical Age bronze, plus it’s a tribute to the Pythian Games at Delphi, one of the most important events in ancient Greece. I want you to look at the face and see the pride and the calm. This charioteer was the winner, and his family would have experienced tremendous glory because of his success. It’s even said (according to Andromache) that family members were known to die in the stands when their sons/brothers won the Pythian Games from happiness. Finally, I was impressed by the musical instrument standing in the final corridor of the museum.

It’s an ancient organ, perhaps the oldest musical instrument with a keyboard. 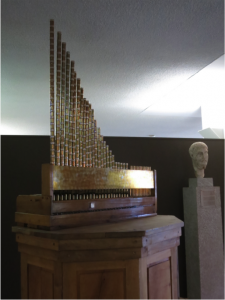 No, I am not a musician myself, but the familiarity of this instrument was eerie. It was a miniature of a device I’ve seen my entire life, a musical connection between my world and that of the Greeks, and more astounding than the lyre (the harp) because of the technology involved in its creation. The ancient Greeks may not have played Fur Elise, but they were moving their fingers in a pattern that I might recognize today. It was staggering to consider.

When we moved into the Delphi sanctuary, we learned a valuable lesson: Even if the schedule of a Greek monument says that it’s open until 3, you need to be there at least an hour before closing. The schedule means when you need to be OUT, not the last time you can come IN. Remember that! Just in case you think you have more leeway than you, in fact, do.

Delphi is an uphill climb. If you’re on a family trip, remember that people who are very young or in poor shape will probably find Delphi overwhelming. 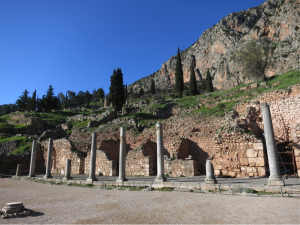 My group was very fit and could probably have made it up to the stadium section of the sanctuary, where the games were performed, but that section was roped off for restorations. Instead, we had to content ourselves with a walk to the ancient theater, where thousands of people sat to watch comedies and tragedies during the games. Andromache told us that all Greek theaters were built into hillsides, like the ones at Delphi. While that arrangement makes a great deal of sense – it’s got natural support – it also provides an extra advantage: you always have a view behind the stage. If you’re bored to tears, you can gaze out into the horizon and entertain yourself. No such happy distractions exist in today’s theater (not even in Roman theater, honestly), but they should! A gorgeous backdrop can entertain even the pickiest of theatergoers – my Greek heroes definitely knew that.