An Educational Trip in Italy – Rome and Venice

The Italian adventure continued… on to Rome and Venice

When we started planning our trip to Rome, a student of mine stopped me and said I had to call the tour guide she had. She couldn’t remember the guide’s name, but she gave me this one tell-tale detail: the guide was Italian but grew up in Fort Worth, Texas. After just a few search attempts, I found the Papini family, owners of the highly celebrated Rome Guide Services. This is truly a family affair; everyone on staff is related and can claim a Roman heritage. We were paired with Carlo Papini for our tour, and we had one objective—get advance access to the Vatican in order to see the Sistine Chapel with some amount of leisure time. Lines to enter the Vatican in the morning can stretch around the block, a fact I know well because I’ve stood in that line. It was not fun. Besides, as much as you can look around, it’s hard to take in the expanse of the Vatican grounds. The museum itself stretches over 9 MILES!! So, if you have high points you want to hit, you’ll need a guide.

What I was really interested in seeing on our tour was the controversial sculpture of Laocoön and his sons: 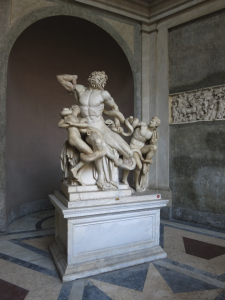 Laocoon was a Trojan priest of Poseidon who recognized the deception of the Trojan horse. When he attempted to warn the Trojans, the Olympian gods sent snakes out of the sea to silence him. Laocoon and his sons died a miserable death, and they’re a classic example of innocents who die in myth because the whims of the gods dictate that they should. I saw this statue in my art history and classics courses, and I wanted to see it in person. After all it’s the quintessential example of Hellenistic art, with its overt display of emotion and excessive motion. Laocoon himself looks like he is coming unglued, almost as if he will break free of the marble prison in which he has spent so many centuries and assert his innocence. But, alas, he won’t – because he’s just a statue, if an extremely fabulous one.

This statue was a legend even before it was excavated in Rome in 1506. There were ancient sources that described its tortured appearance, with Laocoon and his sons being overwhelmed by sea serpents and dragged into the depths of the sea. According to ancient sources, the statue once stood in the palace of the Emperor Titus, and it had been the object of many a search.

There are some who believe that the Laocoon we see is actually a fake, perhaps even crafted by Michelangelo himself. However, I like to think otherwise (and I have zero grounds for making any judgment of any kind) because the Laocoon provided such an acknowledged role model for Renaissance sculptors. Raphael used the face in his works, and such masters as Titian and Rubens sketched the work multiple times to gain greater familiarity and ability with the human form. Furthermore, if Michelangelo truly did sculpt this work, why would he leave it incomplete? Laocoon’s right arm, which bows behind his back, was missing when the piece was found, and Michelangelo conjectured that the arm had indeed reached backwards to seize the attacking serpents. However, his contemporaries disagreed with him, and until the 1950s, the piece had an outstretched arm. Then, research and the chance finding of a new arm confirmed Michelangelo’s hypothesis, and the figure was reconstructed to reflect the new insights. A perfectionist like Michelangelo would never have allowed such a misguided representation of his own masterpiece. So, in my mind, the Laocoon is an ancient work, even if it’s a copy of an early ancient piece. It is one of the most breathtaking pieces of art I have ever seen – right up there with Bosch’s “Garden of Earthly Delights” and “Guernica.” Napoleon must have agreed, for he seized the Laocoon when he took Rome in 1799, and it sat in the Louvre until 1816.

I could not have found the Laocoon without Carlo Papini’s help. For all that I knew about the piece and all that I felt in my heart about it, within the labyrinthine Vatican museum, I would never have walked into the unassuming courtyard. I would have missed it, and I would have kicked myself. I needed Carlo’s keen knowledge of the museum to achieve my goal of seeing this spectacular feat of human artistry.

Back to the top

Additionally, each year, we work with students and talk to them about Roman history. The emperor that makes the larges impression (besides Augustus, of course) is Nero. I mean, he acted in common Roman theaters, murdered his mother, and played the lyre while Rome burned. The fact that his home, the Domus Aurea, has been unearthed is so exciting. In the Vatican stands Nero’s bathtub, taken directly from the Domus Aurea. The material of the bathtub is porphyry, a purple stone that was so hard to cut that between ancient Roman and medieval times the technology to make hard enough steel to carve porphyry was lost. The Romans quarried their porphyry in Egypt and brought it back to the imperial capital as a symbol of Roman wealth and power. Nero used one of the largest hunks of porphyry ever rendered to make his bathtub (or whatever it really was). 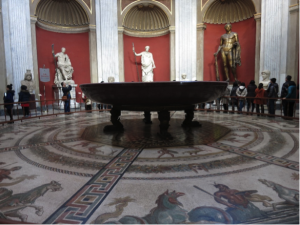 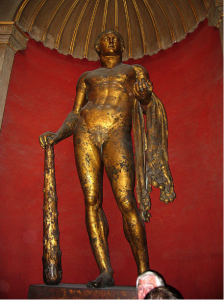 The tub sits atop a phenomenal mosaic floor, and in the rotunda stands one of the largest ancient bronze statues ever found, the bronze Hercules – The piece was struck by lightning in the 2nd century and was buried in front of the Theater of Pompey, where it originally stood, probably to prevent it from further damage, but also most likely out of superstitious concern.

These highlights would not have been nearly as impressive without Carlo’s insights. Yes, I knew about them, but I might have overlooked them. Again, we were dealing with NINE MILES of museum. There is more educational travel condensed in that series of halls than anywhere else in the world. I encourage you to go prepared with a knowledgeable guide at your side. It’s too easy to miss the magic otherwise.

Back to the top 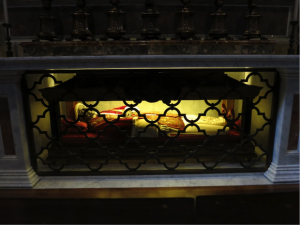 Inside St. Paul’s, we witnessed a host of mind-blowing sights, but I think it is worth mentioning the body of Pope John XXIII. Illuminated rather eerily, the body refuses to decompose! No one knows why, but this joyful pope displays the same tranquility in death that it did in life.

For educational travel geeks, this takes the concept of the mummy to the next level – because no fancy desert salts caused this miraculous preservation. It’s mysteries like this that make history and life on earth so fascinating. We may never crack the code, and that’s just fine with me.

Another site that merits mention is the almighty Pantheon. While we’ve all seen its photos, have we considered how spectacular it is that the Romans constructed a dome before the first century AD that still stands? It is important to mention that the Pantheon we all know and love is often misunderstood. While the inscription on the front of the temple reads, “Marcus Agrippa, son of Lucius, made this building when consul for the third time,” the building we currently see in Rome actually dates to a later time. Agrippa’s Pantheon burned in AD 80, and Hadrian, the famed Emperor whose wall still graces the English countryside, rebuilt it in 114, presumably in a far grander style. Although the fall of Rome resulted in the destruction of countless ancient monuments, the Pantheon survived because Pope Boniface IV converted it into a Christian church in 609 AD – wrap your brain around the fact that we are talking about 1400 years ago!!!

The Pantheon is so remarkable because of its lasting dome. Concrete was lost altogether to mankind after the fall of the Roman Empire; the finer points of its use were literally unfathomable. However, in Hadrian’s time, the Roman people knew how to combine pumice and tuff into the concrete, making the dome progressively less dense as the height increased. Therefore, the Pantheon’s dome could rise proudly and comfortably for generations. 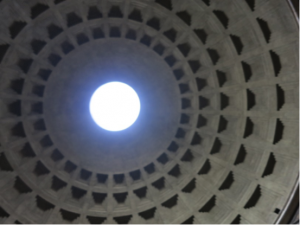 Important mention – Educational travel in Rome is absolutely complemented by a trip to the Capitoline Museum. There, you will see busts of all major Roman figures, from Cicero to Caracalla. You will also have the chance to look at the massive statue of Augustus that once stood in the Forum. I recommend getting there early. Yes, I may be abnormally obsessed, but we got to see the sculpture of the she-wolf who nursed Romulus and Remus and the astounding bronze statue of Marcus Aurelius returning in triumph on horseback. I’ll be honest with you; you could walk all day through this museum and never see it all. Then, you could head over to the National Museum (as I plan to do on our next trip) and have the same experience. You would have the same experience at the Vatican museum, and so on. Just imagine the past with that in mind. A world of sculpture, of art. Imagine a city filled with white marble and stern visages. These sculptures are in many instances all that remain of that sparkling past. That’s why I never get tired of talking about Roman art and why I will always refer to Google images and other web sources for visual representations of the past. We have an abundance of these visual references. Let’s embrace them.

Venice has a far different ring to it than Rome. It’s ancient, indeed, but the richness of Venetian history really peaks in later centuries. Venice was a part of our trip because I had read about the strength of the doge system in Venice in the Middle Ages and seen evidence of its reach during a vacation to Croatia. After a trip to Venice, I can say with certainty two things: (1) It’s great to visit in the winter and (2) It’s not as much of a historian’s destination as Rome and Florence.

We would all recommend the winter travel time because of the dearth of travelers at that time. Literally, the streets are empty, and on our tour of the Doge’s Palace, we had the tour guide practically to ourselves. That’s an important mention, as well: the guides at the Doge’s Palace are really good. You don’t need an independent guide, provided that you are there in a low enough season that you can get in on a scheduled tour. We got to see the place where Casanova was held captive and the council room where his fate would have been decided. That was interesting, and the architecture was mesmerizing. However, there’s a strange, lurking history in Venice that I would like to know more about.

Venice is one of the only places that Charlemagne could not capture. It was its own country. It was exceedingly Eastern and exotic and wealthy. It was the home of Marco Polo, whose travels brought (purportedly) pasta to Italy and whose journeys captivate even the most disenchanted student of history. It maintains an active Carnival where masks are the order of the day. And yet it is terribly inaccessible to the casual traveler. All you can hope to do is wander the canals and marvel at the rarity of the city. 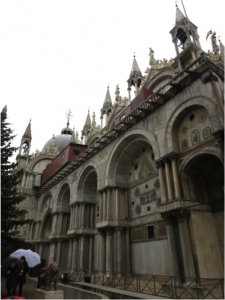 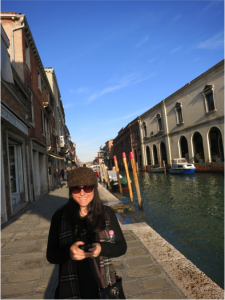